The Family Guide to the Law of Attraction: Learn How to Use the Magic of the Universe and Make Stuff Happen--Together! (Paperback) 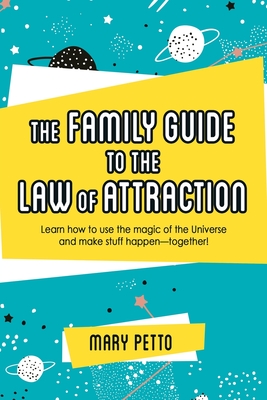 The Family Guide to the Law of Attraction: Learn How to Use the Magic of the Universe and Make Stuff Happen--Together! (Paperback)


Not On Our Shelves—Ships in 1-5 Days
(This book cannot be returned.)
Everyone has the power to magically get what they want, transform any situation into one that suits them, manifest experiences that they desire, and - most importantly - live a life in which everything just flows. This is what the Law of Attraction is all about. Once you learn how to make this magic work, it's really important for the people closest to you know the magic, too. Because while we are powerful, we are also human, so it's easy to forget. As a group-families, couples, roommates, live-in helpers, even your bowling team-everyone gets their magic boosted when they learn about and implement the magic of the Law of Attraction together.
While she wasn't always aware that there was a name for what she was doing, Mary Petto has been leveraging the Law of Attraction since she was a teenager. Many years after she manifested her very first boyfriend, she was introduced to the Law of Vibration at a professional development program sponsored by her employer. It was then that she began her practice of the "fake it till you make it" theory, a popular way to move ahead in one's career that few understand is based on the Law of Vibration-and it certainly worked for her. Mary became a young executive in the financial services world just as she had always dreamed. Her marketing career took off, and eventually she manifested a consulting business, creating marketing plans and social media strategies during the early years of Facebook and Twitter for entrepreneurs, authors, doctors, environmental experts, and magazines. It was many years later that Mary discovers the book The Secret. The Secret was eye-opening for her because it helped her understand that she had been practicing the Law of Attraction techniques without even realizing it. She hot back to proactively harnessing the magic for herself, and dedicated years to help adults and children manifest the lives they wanted, spreading awareness of the Law of Attraction and creating personalized practices for tapping into the Universal Source. In addition to private Law of Attraction coaching, Mary speaks to audiences of all sizes is a regular contributor to Thrive Global and other publications.