Hill Women: Finding Family and a Way Forward in the Appalachian Mountains (Paperback) 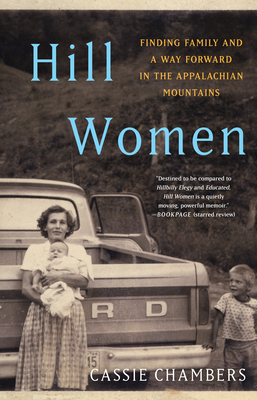 Hill Women: Finding Family and a Way Forward in the Appalachian Mountains (Paperback)


Not On Our Shelves—Ships in 1-5 Days
After rising from poverty to earn two Ivy League degrees, an Appalachian lawyer pays tribute to the strong “hill women” who raised and inspired her, and whose values have the potential to rejuvenate a struggling region.

“Destined to be compared to Hillbilly Elegy and Educated.”—BookPage (starred review)
“Poverty is enmeshed with pride in these stories of survival.”—Associated Press

Nestled in the Appalachian mountains, Owsley County is one of the poorest counties in both Kentucky and the country. Buildings are crumbling and fields sit vacant, as tobacco farming and coal mining decline. But strong women are finding creative ways to subsist in their hollers in the hills.

Cassie Chambers grew up in these hollers and, through the women who raised her, she traces her own path out of and back into the Kentucky mountains. Chambers’s Granny was a child bride who rose before dawn every morning to raise seven children. Despite her poverty, she wouldn’t hesitate to give the last bite of pie or vegetables from her garden to a struggling neighbor. Her two daughters took very different paths: strong-willed Ruth—the hardest-working tobacco farmer in the county—stayed on the family farm, while spirited Wilma—the sixth child—became the first in the family to graduate from high school, then moved an hour away for college. Married at nineteen and pregnant with Cassie a few months later, Wilma beat the odds to finish school. She raised her daughter to think she could move mountains, like the ones that kept her safe but also isolated her from the larger world.

Cassie would spend much of her childhood with Granny and Ruth in the hills of Owsley County, both while Wilma was in college and after. With her “hill women” values guiding her, Cassie went on to graduate from Harvard Law. But while the Ivy League gave her knowledge and opportunities, its privileged world felt far from her reality, and she moved back home to help her fellow rural Kentucky women by providing free legal services.

Appalachian women face issues that are all too common: domestic violence, the opioid crisis, a world that seems more divided by the day. But they are also community leaders, keeping their towns together in the face of a system that continually fails them. With nuance and heart, Chambers uses these women’s stories paired with her own journey to break down the myth of the hillbilly and illuminate a region whose poor communities, especially women, can lead it into the future.
Cassie Chambers grew up in eastern Kentucky. She graduated from Yale College, the Yale School of Public Health, the London School of Economics, and Harvard Law School, where she was president of the Harvard Legal Aid Bureau, a student-run law firm that represents low-income clients. Chambers then received a Skadden Fellowship to return to Kentucky to do legal work with domestic violence survivors in rural communities. In 2018, she helped pass Jeanette’s Law, which eliminated the requirement that domestic violence survivors pay an incarcerated spouse’s legal fees in order to get a divorce. She lives in Louisville with her husband and their son.
“Hill Women is a gritty, warm love letter to Appalachian communities and the resourceful womenwho lead them. . . . [It] feels especially urgent now, in our post-2016, post–Hillbilly ElegyAmerica. In a sense, Chambers is responding to the ‘bootstraps’ narrative of J. D. Vance’s controversial memoir, which has been criticized for blaming Appalachians for their own circumstances. Hill Women shows an Appalachia that Hillbilly Elegy obscured.”—Slate

“Engaging . . . With humility and humor, Chambers tells not just her own story, but those of her parents, grandparents and other kin, as well as those of her clients, women who struggle to get schooling and work, escape abusive relationships and raise their children despite poverty, isolation, the opioid epidemic and a legal system that makes every action and transaction especially difficult. . . . Chambers’ story is especially effective because she tells it without outrage or indignation, rather with gratitude and pride. . . . Hill Women is a fine memoir that shines light on an American region far too often denigrated and stereotyped.”—Minneapolis Star Tribune

“In Hill Women, Chambers . . . break[s] down myths about the region and reveal[s] just how strong its people are.”—Nashville Lifestyles

“Cassie Chambers tells the story of the women in the mountains of Kentucky who nurtured her, as well as her own journey to become a fierce defender of Appalachian women. This is a book that teaches us about service and gratitude, family and the tenuousness of belonging, and the power of education, loyalty, and home.”—Steven Stoll, author of Ramp Hollow

“Cassie Chambers’s intimate portrait of the lives of rural mountain women will complicate everything you think you know about Appalachia . . . This is a stunning and expansive book . . . offers us a nuanced and necessary feminist perspective often lacking in our national conversations.”—Rachel Louise Snyder, author of No Visible Bruises

“Women in Kentucky’s Appalachian community come into focus in lawyer Chambers’s powerful debut memoir, which aims to put a human face on a stereotyped region. . . . This is a passionate memoir, one that honors Appalachia’s residents.”—Publishers Weekly

“A nuanced portrait of the women of Appalachia . . . [Chambers] offers a personal and compassionate voice to the national conversation around poverty, class, and economy in the Coal Belt. . . . The argument floating below the surface of this memoir is one about economy and culture—an economy that generates massive wealth, at great human cost, and a culture of contempt for the poor."—The Progressive

“This Appalachian memoir doesn’t just celebrate the women of the hills—it fights for them. . . . [Chambers] faces the region’s challenges with heartbreaking accounts of opioid addiction and a legal system less concerned with justice than it is with wringing money out of the broke and desperate. Like the hill women before her, Chambers is pragmatic, fighting for achievable change in a punishing system.”—Shelf Awareness