A Guide to Midwestern Conversation (Hardcover) 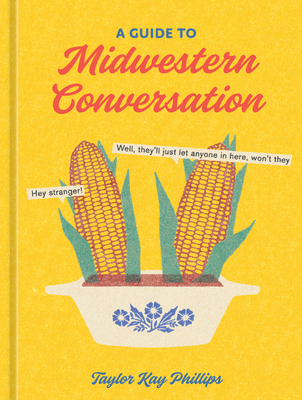 A Guide to Midwestern Conversation (Hardcover)


Not Yet Published—Pre-Order Now
Learn (and love) the language of the landlocked in this bitingly funny illustrated guide to the common phrases and sentiments of the American Heartland, from the author of the McSweeney’s series “A Guide to Midwestern Conversation.”

If you end an evening by slapping your thighs and saying, “Welp, I’ll go ahead and get outta your hair,” then you don’t need this guide, but you sure as heck might like it. Full of common Midwestern phrases (and what they really mean behind the friendly facade), A Guide to Midwestern Conversation is an affectionate, self-deprecating look at the language of a people long defined by their kindness and reduced to their voting patterns. Written by born-and-bred Midwesterner Taylor Kay Phillips, it’s a wink, a hug, and a firm handshake (with eye contact) to the millions of Americans who say soda and pop interchangeably and grew up doing tornado drills in school.


Including an array of guides, tips, and profiles of all the states included, A Guide to Midwestern Conversation is guaranteed to make Midwesterners (and their friends) laugh out loud, nod their heads, and ask if “anyone needs anything real quick while I’m up.”
Taylor Kay Phillips is an Emmy-Award winning writer and comedian originally from Kansas City, Missouri. She currently works for Last Week Tonight with John Oliver on HBO. Her work has appeared in The New Yorker, McSweeney’s Internet Tendency, and Reductress among others. She lives in Harlem with her husband and three coffee makers.

Jovaney Hollingsworth grew up in the Bahamas but often visited his grandparents in Michigan, where he loved the iconic nostalgia of the Midwest. Eventually moving to Minnesota, Jovaney combined this American iconography with the bright Caribbean color palette and turned it into a successful career as a graphic designer and illustrator.