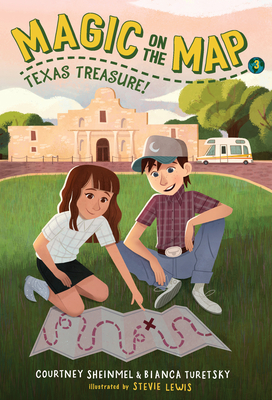 
In Stock—Click for Locations
Travel around the United States of America with twins Finn and Molly in this new chapter book series that highlights a different state in each book! This time, they're discovering BIG treasure in the great state of Texas!

Magic and mystery from sea to shining sea!

Welcome to the Alamo! PET, the magical camper, flies Finn and Molly Parker to San Antonio, Texas. The twins know they're more than just tourists--they have work to do! Their mission? Help their new friend, Carlos, find buried treasure. But something's funny about Carlos's map, and Finn and Molly begin to think maybe they're looking for treasure that's not just silver and gold . . .

Each Magic on the Map book includes a map of the US, a map of the state that Finn and Molly visit, and 10 amazing facts about that state!

Don't miss the other Magic on the Map adventures! Magic on the Map #1: Let's Mooove! and Magic on the Map #2: The Show Must Go On.
Courtney Sheinmel and Bianca Turetsky wanted to go on adventures together. But they both live in New York City, where it's hard to find a parking space for a camper, so they decided to do the next best thing: write about it!

Courtney is the author of over twenty books for kids and teens, including the Stella Batts series for young readers. Bianca is the author of the famed Time-Traveling Fashionista series, which has been translated into nine languages.

For half of the year Stevie Lewis travels out of her van, furthering her passion for art and the outdoors. She is also an avid hiker and rock climber. With a background in animation, she now illustrates children's books, including Sun! One in a Billion by Stacy McAnulty, Prince & Knight by Daniel Haack, and Lost in the Library by Josh Funk. She is currently based in northern Arizona, where she lives with her partner and two dogs.