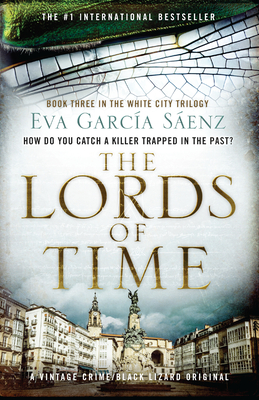 This is book number 3 in the White City Trilogy series.

The third novel in the internationally bestselling White City Trilogy sees Kraken on the hunt for a murderer whose macabre crimes are lifted straight from history.

Kraken is enjoying life as a family man, content to spend his days with Alba and their young daughter Deba. But there's no rest for the weary, especially when you're the most famous investigator in Vitoria. Kraken and Esti are charged with investigating the mysterious disappearance of two sisters and finding it hard to make any headway when a wealthy businessman's murder appears to shine a light on the case. The man was poisoned with a medieval aphrodisiac--a crime that has eerie similarities to one detailed in the novel everyone in Vitoria is buzzing about. When the two sisters are discovered trapped behind a wall--bricked up alive--the parallels to the novel are undeniable. With the author's identity a closely held secret, will Kraken be able to track down the killer before they can strike again? Or will Vitoria's sordid underworld finally break Kraken, and his family, apart.

A VINTAGE CRIME/BLACK LIZARD ORIGINAL
EVA GARCÍA SÁENZ was born in Vitoria and has been living in Alicante since she was fifteen years old. She published her first novel, La saga de los longevos (The Immortal Collection), in 2012, and it became a sales phenomenon in Spain, Latin America, the United States, and the United Kingdom. She is also the author of Los hijos de Adán (The Sons of Adam) and the historical novel Pasaje a Tahití (Passage to Tahiti). In 2016 she published the first installment of the White City Trilogy, titled El silencio de la ciudad blanca (The Silence of the White City), followed by Los ritos del agua (The Water Rituals) and Los señores del tiempo (The Lords of Time).
"Spanish author Sáenz’s conclusion to her White City trilogy (after The Water Rituals) brilliantly fuses two parallel narratives. . . . Besides providing memorable glimpses into a little-known European cultural milieu, Sáenz offers profound insights into the psychology of serial killers, shown as skilled and charismatic professionals, who, devoid of empathy, prey parasitically on the gullible. This Basque noir deserves a wide audience."
—Publishers Weekly (starred review)