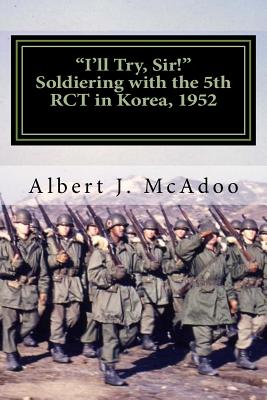 
Not On Our Shelves—Ships in 1-5 Days
(This book cannot be returned.)
"I'll Try, Sir Soldiering with the 5th RCT in Korea, 1952" is a rifleman's account of the service of the US Army's 5th Regimental Combat Team's in the Korean War during 1952. The bloody battles of 1950-51 were past. The war had degenerated into a static, but bloody, stalemate with the troops of both sides dug into hundreds of miles of trenches, barb-wire, and bunkers. Author Al McAdoo was a young replacement infantryman to this outfit, and served on the front lines, and as a guard at the massive Koje Do Prisoner of War camp. This is his story, combined with years of research into the archival records of the 5th RCT in this period. Illustrated with maps and packed with period photographs, "I'll Try, Sir " is a thorough account of combat infantry service in Korea in 1952; the forgotten year of the forgotten war.