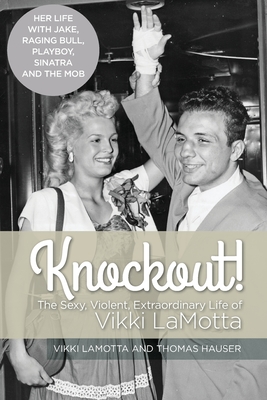 
Not On Our Shelves—Ships in 1-5 Days
(This book cannot be returned.)
The story of Vikki LaMotta's life reads like a highlight reel from a television mini-series. Born into poverty. Raped at age fourteen. Pregnant and married at sixteen. Subjected to brutal beatings by her husband world middleweight champion Jake LaMotta. Vikki left Jake, worked as a chorus girl to support three young children, was pursued by Frank Sinatra and became romantically involved with mob boss Sam Giancana.
At one on time or another, she crossed paths with the likes of Babe Ruth, Jimmy Durante, Johnny Carson, and Robert Deniro. At age 51, she posed nude for Playboy. The issue sold more copies to women than any issue of Playboy ever. Vikki' own story is now told and written with acclaimed author Thomas Hauser and reveals much new information about her amazing life.
Knockout is a straight-from-the-heart account of a life filled with sex and violence that ultimately became a survivor's journey to redemption long before the #Me Too Movement. "Not an edited life but honest facts and events." Vikki wrote to Hauser on completion of the manuscript. "After a final reading, a deep sigh with an amazing amount of relief and exhilaration. Not relief of a project completed but relief of a past saved, not lived in vain."
"Vikki LaMotta was a good person." writes Hauser. "That's as simply and honestly as I can put it. She battled her demons and won. This is her story."
This edition includes a new afterword by Hauser coincides with the 40th anniversary of the award winning movie, Raging Bull directed by Martin Scorsese. Robert DeNiro won his first Oscar as Best Actor for his role of Jake LaMotta, and Cathy Moriarty who at only 18 years old was nominated for Best Supporting Actress Oscar in her portrayal of Vikki LaMotta. Vikki LaMotta (on her ex-husband, Jake)
"One night when I was home alone with the children, Jake walked in. He didn't say anything. Nothing seemed different from any of his other visits. Then he slugged me. And punched me again. In the past, he'd held something back when he hit me. This time, every punch was calculated to disable and cause pain, and the punches kept coming. I didn't think anyone was capable of hurting me that badly. There was nothing I could do. I was helpless and the punches kept raining down. Then fear set in. I stopped trying to protect myself. I couldn't feel the individual blows. I was paralyzed and numb. I realized that Jake might actually kill me."
(On time spent with Robert DeNiro during the formative stages of Raging Bull)
Finally, around two in the morning, Bobby asked, "Where should I sleep?"
"Where would you like to sleep?"
"Wherever you want me."
"You have a choice," I told him. "There's a bed here and a bed in the den."
"If I sleep here, where will you sleep?"
"I don't know. I guess I could sleep in the den."
There was a long pause. And I have to admit, by then I was telling myself, if he attacks me, that's cool.