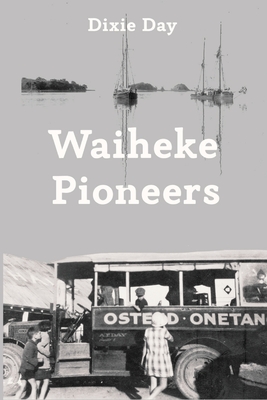 Now with a section on the island's indigenous history by historian, Paul Monin

Beautifully written, filled with entertaining anecdotes, Waiheke Pioneers is a gem of historical

It all started with listening to some of the stories told around our kitchen table. I found them so

interesting that I started to jot them down. I suppose I've been collecting the island's history in

notebooks for more than 30 years.

Dixie Day married into one of Waiheke Island's oldest families in 1940, and thus began a life-long passion

for the island, its quirky characters, and the many stories they told. In 1972 she and a group of

museum. Dixie Day passed away in 1996, but her legacy endures.

Waiheke Pioneers, first published in 1989, is the culmination of nearly half a century of careful research

and collation of documents, photos and stories. The book has served as an essential resource for

historians and family history buffs, and its elegant conversational style has endeared it to generations of

the island's residents and visitors. This new edition, revised and expanded, makes the island's pioneer

stories available to a new generation of readers and researchers.