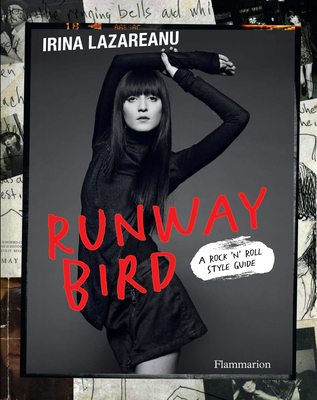 
Not On Our Shelves—Ships in 1-5 Days
Top model and musician Irina Lazareanu decrypts the essence of rock ’n’ roll chic, taking cues from her coterie of friends from the fashion and music worlds.

If you could saunter down the runway and slip backstage on the heels of Irina Lazareanu, who would you meet, what antics would ensue, and what on earth would you wear? Irina—Karl Lagerfeld’s muse, Kate Moss’s BFF, and Peter Doherty’s former fiancée—introduces you to her inner circle—models, fashion designers, editors, Hollywood starlets, and rockers—to pilfer the secrets of their individually cool and universally coveted rock ‘n’ roll style.

She shares fashion tips from her fellow runway birds and offers insight from her work with designers including Karl Lagerfeld, Marc Jacobs, and Nicolas Ghesquière, as well as with fashion professionals like Edward Enninful and Inez & Vinoodh. Irina includes killer looks from friends such as Sean Lennon, Yoko Ono, Hedi Slimane, Lindsay Lohan, Mark Ronson, and the late Amy Winehouse.

She details a host of wardrobe tips and essentials, including dos and don’ts for creating your own folk, retro, punk, or glam rock look. In scrapbook collages and lively anecdotes from her life on the fashion and concert circuits, the captivating Romanian-Canadian top model and singer shares showstopping sartorial nuggets that will give your threads—and attitude—a rock ‘n’ roll edge.
Top model Irina Lazareanu has appeared on hundreds of magazine covers, including Vogue Italy, W magazine, Harper’s Bazaar, Self Service, Elle, and Marie Claire. She walked countless runway shows—Chanel, Dior, Versace, Yves Saint Laurent, Prada, Alexander McQueen, Burberry, and Marc Jacobs—and has been a muse to fashion designers. She appeared in ad campaigns for Chanel, Balenciaga, Burberry, L’Oréal, and Kate Moss’s Topshop collection. Olivier Zahm is cofounder and editor of Purple. Drew McConnell is a founding member of London-based band Babyshambles; he worked with Courtney Love and is touring as Liam Gallagher’s bassist and backing vocalist. Pascal Loperena, celebrity publicist, is former art director at Ford Models Paris. He coauthored Get Gorgeous (Flammarion, 2016).


“If you’re looking for an insider’s guide to fashion, this effortlessly stylish read has it all." —IMAGE MAGAZINE


“Irina captures her readers like prey in her web, unraveling each thread of silk in the web and conjuring the different planes of the 90s. Its glamour, its magnetism. Through these threads she uncovers a notorious web of rock ’n’ roll annexing fashion music and art.” —CENT