I Love to Hate Fashion: Real Quotes and Whispers Behind the Runway (Hardcover) 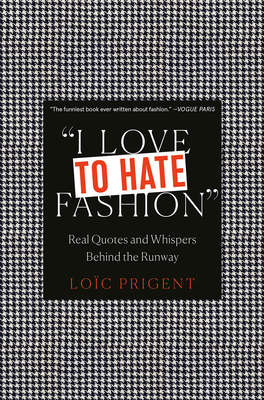 I Love to Hate Fashion: Real Quotes and Whispers Behind the Runway (Hardcover)


Special Order—Subject to Availability
Called “the funniest book on fashion ever written” by Vogue, here is the hilarious chronicle of life behind the runway
For years, French journalist and documentarian Loïc Prigent has been tweeting the funny interactions, cruel criticisms, and absurd exclamations overheard during Fashion Week. Snarky statements on fashion mixed with absurdist poetry, the original French edition of Prigent’s book has been celebrated by thousands of fans. For the first time, discover the backstage world of the models, designers, and rich clients as hilariously overheard and rendered in hundreds of quotes.
Loïc Prigent is a French director and writer known for The Parisienne (2014), Habillé(e)s pour l'été 2015 (2015) and The Legacy of Alexander McQueen (2015).