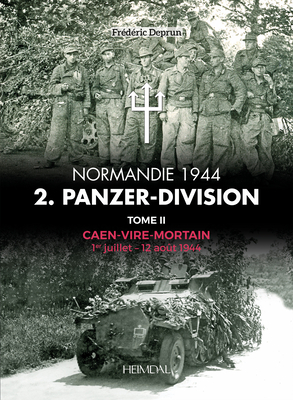 The second of a three-volume, richly illustrated study of the German armored unit. The author Fr d ric Deprun, has devoted more than ten years to studying meticulously this armored unit's engagements in the Norman bocage.

The first part deals with the unit re-forming in the Arras area while waiting for D-Day then guides the reader through the murderous fighting at Caumont-l'Evant , Cahagnes, Cheux, then May-sur-Orne in June and July 1944. In the second volume, an account is given of the Panzer unit's inability to contain the Allied offensive to the south of Saint-L at the end of July 1944, then the attack at Mortain up until the moment when the men in the unit with the Trident were encircled in the Chambois-Argentancauldron.

The three volumes are illustrated with 800 unpublished photographs and more than 60 maps, guide the reader through the host of eyewitness accounts along the 2.Panzer-Division's tragic route through the Calvados, until it crossed the River Seine.