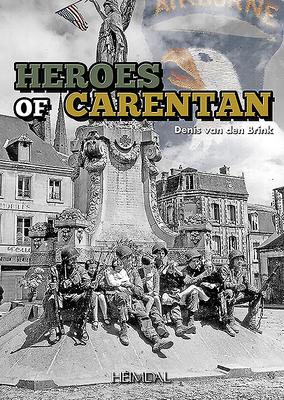 
Special Order—Subject to Availability
The liberation of Carentan is not well-known even though it wasn't just an anecdote in the Battle of Normandy. It was in fact the object of ferocious fighting from 9 to 13 June 1944 with two elite units confronting each other: the American paratroopers from the 101st Airborne and the Fallschirmj ger of the FJR 6. General Maxwell Taylor, commanding the 101st Airborne used the whole of his division with its four airborne regiments but also all the supporting units, its four airborne artillery batteries, its medical units and its logistics to encircle the town and to chase out the German paratroopers under Major Freiherr von der Heydte; they left after fierce fighting during the night of 11-12 June only to return the next day with the 17. SS-Pz-Gren-Div. "Goetz von Berlinchingen."

The German losses as well as those of the Americans were very heavy, as were those of the civilians (the town center still bears the signs). This book gives a detailed account of the Battle of Carentan. The accounts given by the participants in the battle enable the feats of arms to be recorded; they are always poignant, moving even. Each story is a personal epic in itself. This book modestly gathers together some of these individual adventures, throwing a profoundly human light on the complexity and the violence of the fighting for the liberation of this region in the Cotentin Peninsula. For example, Edward David Shames, one of the last heroes of Carentan still alive. Born 13 June, he thought his last hour had come on... 13 June 1944. For these reasons, Carentan holds a special place in his memories. It was also where he landed at 01h40 on D-Day. Also Don Rich who was wounded in the legs by machine gun fire in G-Company's charge, during the attack on the town. Let's mention also the Californian Staff Sergeant Thomas M. Rice (C/501st) who experienced a Dantesque experience in the Barquette Locks sector, his battalion's objective. An obvious must-have for all Battle of Normandy buffs, or for readers sensitive to the human aspects of the war.