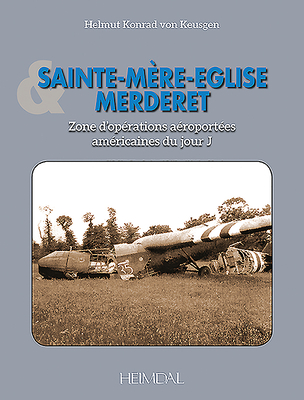 After his books about the Pointe du Hoc, WN 62 and recently Pegasus Bridge and the Melville Battery, von Keusgen gives us here a lively chronological account of the airborne attacks carried out by the legendary 82nd and 101st Airborne Divisions in the first hours of the Battle of Normandy.

Not only is the text accompanied by American eyewitness accounts of the very bitter fighting around Sainte-M re-Eglise, the flooded zones and the Merderet Bridges, but also by the accounts of Manche civilians and - von Keusgen's principal contribution - those of German veterans, too.

The reader therefore discovers all the details of what the Fallschirmj ger of the FJR 6 went through, like Bruno Hinz and K.-H. Mayer all mixed up in the fighting at Saint-C me du Mont and the famous "Dead Man's Corner", or like several Grenadiere from the 91. Luftlande-Division, among whom Rudi Escher, about whom we learn more, and the telephonist Heinrich Speiles).

The author moreover has had access to period documents which up until now have remained in the shadows, about Generalleutnant Wilhelm Falley and his aide de camp, Major Bartuzat, liquidated during the night of 5 to 6 June 1944. The text is accompanied by a lot of photographs. Without any doubt, this book will motivate those interested in paratroopers and the fighting in the Cotentin Peninsula.