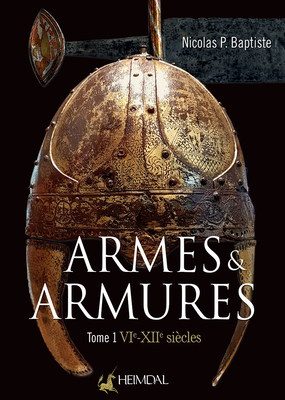 This two-volume work presents the development of arms and armor from the middle ages to the Renaissance. The first volume covers the period between the VI and XIII centuries; the second follows on to cover the XIII to the XVI centuries.

The author and Editions Heimdal have teamed up to address a classic theme and one which has seen little new published in the French language in recent years. These two volumes are the result of a shared sense of theories about material culture and make the most of recent archaeological and historical research. The accompanying high-quality photographs depict many historical objects as they are being preserved and restored by the institutions that house them.

Drawing on the expertise of colleagues in the field the author presents a collection of the most recent research activity and the work is enhanced by being a form of reflection of the community of historians and researchers of weapons and armor.

Richly illustrated with both sketches and photographs the book includes some fabulous reenactor troops depicting the arms and armor. There are also accounts by craftsmen who have uncovered and rediscovered old techniques and production methods for making ancient weapons and armor, including uncovering the dark arts of medieval blacksmithing.