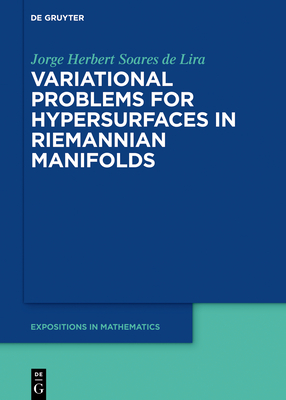 Geometric Analysis is one of the most active research fields nowadays. The interplay between geometric and analytic techniques is at the core of recent remarkable advances in Differential Geometry and Topology. However, the majority of the monographs and books on the subject focus on intrinsic Riemannian Geometry techniques and applications. A systematic treatment of problems involving the extrinsic curvature of submanifolds is still missing in the literature. In particular, up to our knowledge, there are no references joining the geometric and analytic aspects of the theory of hypersurfaces which are solutions of variational problems as it is the case of prescribed mean curvature hypersurfaces. These problems arise naturally in the context of geometric functionals in General Relativity and elasticity theory. This book is aimed to be a comprehensive introduction of the basic geometric facts and PDEs tools as well as to some current research topics on hypersurfaces with prescribed mean curvature in Riemannian manifolds. We also intend to present a unified and simple presentation of classical results on stability, existence of minimal foliations and geometric and analytic inequalities in submanifolds.

The structure of the book can be roughly described as follows: the first chapter presents basic facts on tensor and exterior calculus what fixes the notation and makes the book self-contained in what refers to the geometric language. The main tools of elliptic and parabolic PDEs theory are presented in Chapter 2. Although this is a classical topic our presentation is going to be adapted to the context of Riemannian manifolds. The variational problem we are interested in are discussed in Chapter 3 which also provides a collection of several important theorems on characterization and stability of hypersurfaces with constant (higher order) mean curvature. The mean curvature PDE is studied in depth in Chapter 4 and its parabolic counterpart, the mean curvature flow of graphs, is the subject of Chapter 5. The last chapter concerns higher order mean curvature equations as examples of fully nonlinear problems arising from the geometry of hypersurfaces in Riemannian spaces.

Researchers and Ph.D. students in Differential Geometry and Analysis of PDE may find in this book a compendium of techniques and applications of elliptic and parabolic PDEs to geometric problems. It also provides a structured presentation of some of the most important results in the field of constant mean curvature hypersurfaces. Since it is intended to be self-contained, it might be also used as a reference textbook for advanced topics courses in Differential Geometry and Analysis.