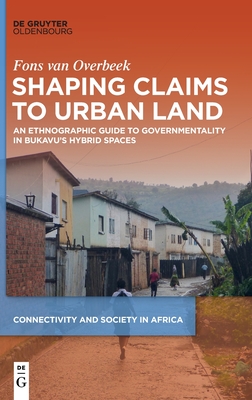 
Not On Our Shelves—Ships in 1-5 Days
The concept of 'hybridity' is often still poorly theorized and problematically applied by peace and development scholars and researchers of resource governance. This book turns to a particular ethnographic reading of Michel Foucault's Governmentality and investigates its usefulness to study precisely those mechanisms, processes and practices that hybridity once promised to clarify. Claim-making to land and authority in a post-conflict environment is the empirical grist supporting this exploration of governmentality. Specifically in the periphery of Bukavu. This focus is relevant as urban land is increasingly becoming scarce in rapidly expanding cities of eastern Congo, primarily due to internal rural-to-urban migration as a result of regional insecurity. The governance of urban land is also important analytically as land governance and state authority in Africa are believed to be closely linked and co-evolve. An ethnographic reading of governmentality enables researchers to study hybridization without biasing analysis towards hierarchical dualities. Additionally, a better understanding of hybridization in the claim-making practices may contribute to improved government intervention and development assistance in Bukavu and elsewhere.
Fons van Overbeek, Historian, Wageningen, The Netherlands.