The Organic Carbon Cycle in the Arctic Ocean (Hardcover) 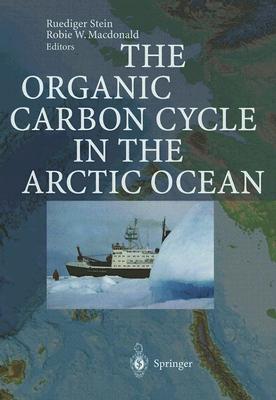 The Organic Carbon Cycle in the Arctic Ocean (Hardcover)


Special Order—Subject to Availability
The flux, preservation, and accumulation of organic carbon in marine systems are controlled by various mechanisms including primary p- duction of the surface water, supply of terrigenous organic matter from the surrounding continents, biogeochemical processes in the water column and at the seafloor, and sedimentation rate. For the world's oceans, phytoplankton productivity is by far the largest organic carbon 9 source, estimated to be about 30 to 50 Gt (10 tonnes) per year (Berger et al. 1989; Hedges and Keil 1995). By comparison, rivers contribute 1 about 0. 15 to 0. 23 Gt y of particulate organic carbon (Ittekkot 1988; 1 Hedges et al. 1997). On average, only about 0. 1 0. 2 Gt y of the organic carbon supplied to the world's oceans has been buried in Holocene sediments, with perhaps 85 90% of that being deposited in deltaic, shelf and upper slope sediments (Romankevich 1984; Berner 1989; Hedges and Keil 1995). To refine the global ocean carbon budget in general and, specifically, to quantify organic carbon burial because it is so important for climatic change, we need detailed measurements of the organic carbon flux in all ocean environments, especially for c- tinental margins (e. g., Liu et al.,2000). With the notable exception of the Arctic Ocean, data have been available for some time on organic carbon sources, pathways and burial in a variety of ocean envir- ments.