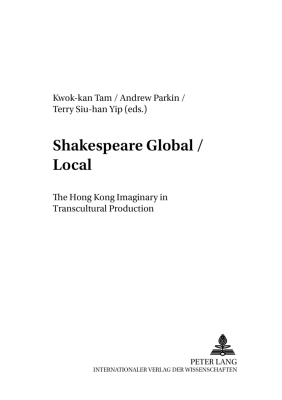 This is book number 17 in the Anglo-Amerikanische Studien / Anglo-American Studies series.

Shakespeare has been introduced to Hong Kong and China for more than one hundred years. Not only are Shakespeare's characters and stories known to the Chinese as part of the most treasured wealth of world culture, his plays have also become classics of the Chinese theatre, both in the modern and traditional styles. The significance of Shakespeare in Hong Kong and China today can be seen in the fact that the playwright has actually become a site of contestation between the global and the local imaginary in transcultural production. Various possibilities in staging Shakespeare's plays provide Hong Kong and Chinese theatre directors valuable opportunities to exercise their imagination in the transcultural contexts of experimenting with a Western form that can be adapted for local appreciation, which at the same time will add a new dimension to the world reception of Shakespeare.
The Editors: Kwok-kan Tam is Professor in the Department of English at the Chinese University of Hong Kong. His recent publications include Ibsen in China. Andrew Parkin is Emeritus Professor of English at the Chinese University of Hong Kong. His recent publication is Hong Kong Poems. Terry Siu-han Yip is Professor and Chairperson of the Department of English Language and Literature at Hong Kong Baptist University. Her recent publications include the anthology A Place of One's Own.