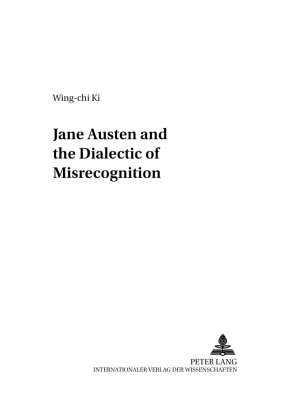 This is book number 27 in the Anglo-Amerikanische Studien / Anglo-American Studies series.

The objective of this book is to present a dialectical framework within which to reread Jane Austen's novels and to counter the critical dichotomy between a 'conservative' Jane (proposed by the containment school of critics) and a 'radical' Austen (proposed by the subversive school of critics). It aims at providing a framework that is flexible enough to explain why the two schools are inadequate, but rigorous enough to shed new light on Austen's complex vision of epistemological enlightenment - namely, her insistence on the 'positive recognition', the 'negative cognition', and the 'cynical misrecognition' as essential moments in the development of the subject. The author argues that Austen's 'dialectics of recognition' point neither towards docile conformism nor revolutionary struggle, but an on-going spirit of critique in the midst of misrecognition.
The Author: Wing-chi Ki is Assistant Professor of English Literature at The Chinese University of Hong Kong.