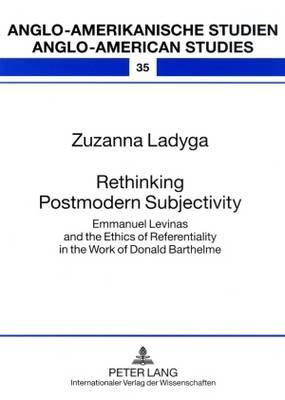 This is book number 35 in the Anglo-Amerikanische Studien / Anglo-American Studies series.

What is postmodern literary subjectivity? How to talk about it without falling in the trap of negative hyper-essentialism or being seduced by exuberant lit speak? One way out of this dilemma, as this book suggests, is via a redefinition of the concept in the context of Emmanuel Levinas and his radical ethics. By defining subjectivity as an ethically charged act of language, Levinas provides a fresh perspective on the often trivialized aspects of postmodern poetics such as referentiality and affect construction strategies. The foregrounding of the ethical dimension of those poetic elements has far-reaching consequences for how we read postmodern texts and understand postmodernism in general. Thus, to prove the benefits of the Levinasian approach, the author applies it to the work of the canonical American postmodernist, Donald Barthelme, and explains the distinctly ethical character of his apparently surfictional experiments.
The Author: Zuzanna Ladyga is an assistant professor in the American Literature Section at the University of Warsaw (Poland), where she teaches postmodern literature, literary theory, and narratology. Her research interests include the interrelation between continental philosophy and theories of literary subjectivity, and postmodern experimental poetics. She is currently working on the referential strategies in the fiction of David Foster Wallace.