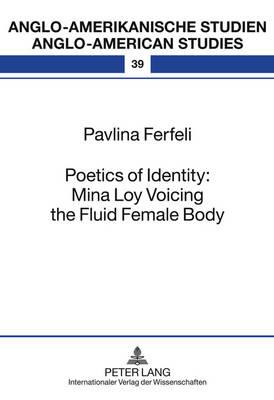 This is book number 39 in the Anglo-Amerikanische Studien / Anglo-American Studies series.

Examining closely the intersection of Continental theories of difference and a predominantly American ethic of diversity, the book uses phenomenology and interdisciplinary study to investigate female embodiment in Mina Loy's poetic and visual work. It contends that Loy's female embodied subjectivity is enacted in the mode of a subject-in-process, forever active in the transformation of materiality, intercorporeality, visuality and ideology. It shows that the representation of a forcefully fluid and unfetished female body endows Loy and her contemporary Surrealist women artists with the necessary tool to redefine the rigid ethics and aesthetics of existing Surrealism, complicate gender identity and set a new basis for the social sciences. As it appears both sexed and asexual, corporeal and transcendent, the female body suggests the impasse of the antagonism between sperm and ovum as well as that of body and mind, with Loy's ardent feminism finally evolving into humanitarian wisdom. The book suggests that even though Loy's work has been traditionally viewed mainly as an instance of modernist rupture, it also forms a humanitarian feminist poetry that bridges, compensates and heals.
Pavlina Ferfeli studied English Literature in Athens and King's College London. She was awarded a PhD with distinction from the University of Athens for her work on Mina Loy. She is interested in feminist poetry and creative writing and has been awarded various poetry prizes, notably from the British Council and the University of Athens.