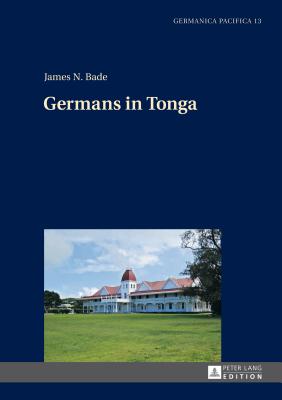 This is book number 13 in the Germanica Pacifica series.

Germans in Tonga is the culmination of an eight-year research project in which the author and his team of researchers gathered biographical material on Germans in Tonga. There are four main sources: the British Consul Tonga files, held in the Western Pacific Archives of the University of Auckland Library Special Collections; the Defence Department Enemy Aliens files and Aliens Records held at Archives New Zealand in Wellington; the Archives of the German Foreign Office (Ausw rtiges Amt) in Berlin; and the Ministry of Justice Archives in Nuku'alofa, Tonga. The volume contains short biographies of over 350 Germans in Tonga born over a 110-year period between 1822 and 1932 and features an introduction by the author on the historical background to the German connection with Tonga.
James N. Bade, Director of the University of Auckland Research Centre for Germanic Connections with New Zealand and the Pacific, is Professor of German and Head of European Languages and Literatures at the University of Auckland (New Zealand).