Skyscraping Frontiers: The Skyscraper as Heterotopia in the 20th-Century American Novel and Film (Contributions to English and American Literary Studies (Ceal #4) (Hardcover) 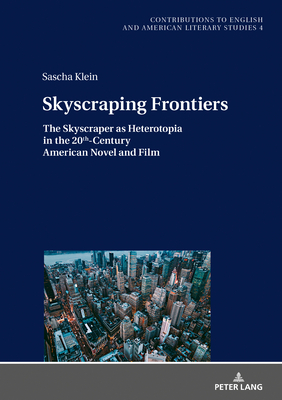 Skyscraping Frontiers: The Skyscraper as Heterotopia in the 20th-Century American Novel and Film (Contributions to English and American Literary Studies (Ceal #4) (Hardcover)

This is book number 4 in the Contributions to English and American Literary Studies (Ceal series.

As a space of extremes, the skyscraper has been continually constructed as an urban frontier in American cultural productions. Like its counterpart of the American wilderness, this vertical frontier serves as a privileged site for both subversion and excessive control. Beyond common metaphoric readings, this study models the skyscraper not only as a Foucauldian heterotopia, but also as a complex network of human and nonhuman actors while retracing its development from its initial assemblage during the 19th century to its steady evolution into a smart structure from the mid-20th century onward. It takes a close look at US-American literary and filmic fictions and the ways in which they sought to make sense of this extraordinary structure throughout the 20th and early 21st centuries. More traditional poststructuralist spatial theories are connected with concepts and methods of Actor-Network Theory in a compelling account of the skyscraper's evolution as reflected in fictional media from early 20th-century short stories via a range of action, disaster and horror films to selected city novels of the 1990s and 2000s.

Sascha Klein has studied History and English Studies with a special focus on US-American literature and culture at the University of Cologne. He completed his PhD as a doctoral fellow at a.r.t.e.s. Graduate School for the Humanities and works as a free lecturer at the University of Cologne. His fields of interest range from American culture, media, and film studies to architecture and urban studies.