111 Places in Yorkshire That You Shouldn't Miss (Paperback) 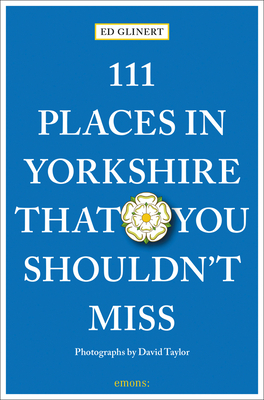 111 Places in Yorkshire That You Shouldn't Miss (Paperback)


Not On Our Shelves—Ships in 1-5 Days
- The ultimate insider's guide to Yorkshire for locals and experienced travelers- Features interesting and unusual places not found in traditional travel guides- Part of the international 111 Places/111 Shops series with over 650 titles and 3.8 million copies in print worldwide- Appeals to both the local market (more than 5.3 million people call Yorkshire home) and the tourist market (more than 1.3 million people visit Yorkshire every year )- Fully illustrated with 111 full-page color photographsThey call Yorkshire God's own country. This is because England's biggest county is also England's most epic and most historically exciting. It has everything: unimaginably beautiful countryside, derelict castles, cliff-hugging coastlines, brutally bleak moors, quirkily quaint villages, wondrously winding waterways and industrial monsters of cities. Many of the most interesting episodes in English history have happened here: the Wars of the Roses, the English Civil War, the birth of the industrial revolution, the rise of the Labour movement. But when people think of Yorkshire they also think of the unusual and the unsung: Bettys delightful tea rooms, cricket at Scarborough, the windswept steps of Whitby Abbey, the steam railway of the Railway Children, Mother Shipton's Cave, and racing at Doncaster and York. Yorkshire has also given birth to some of the greatest and most talented figures in English history: Brian Clough, Harold Wilson, John Wycliffe, William Wilberforce, the Bront Sisters, David Hockney and Barbara Hepworth.
Ed Glinert was born in Dalston, two miles from the East End. He studied Maths and Classical Hebrew at Manchester University, but not at the same time. He worked for Private Eye magazine for more than 10 years, and has written a number of books for major publishers including The London Compendium and East End Chronicles for Penguin. He is one of Britain's most prolific tour guides, working in London, Manchester and Liverpool, and gives talks on cruise ships. He knows who were responsible for the Jack the Ripper murders.