111 Places in London That You Shouldn't Miss (Paperback) 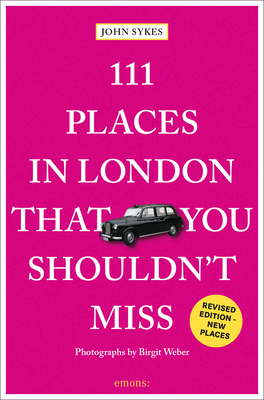 111 Places in London That You Shouldn't Miss (Paperback)


In Stock—Click for Locations
- The ultimate insider's guide to London for locals and experienced travelers - Features interesting and unusual places not found in traditional travel guides - Part of the international 111 Places/111 Shopsseries with over 650 titles and 3.8 million copies in print worldwide; - Appeals to both the local market (more than 8.7 million people call London home) and the tourist market (more than 30 million people visit London every year ) - Fully illustrated with 111 full-page color photographs - Revised and updated edition London is full of strange and beautiful sights. It is a place for traditions and rebels, for the establishment and every alternative subculture. This book celebrates the diversity of the city. It invites you to see Little Ben or the fake 10 Downing Street, and answers both conventional and unusual questions. What, apart from Rolling Scones, will you see at God's Own Junkyard? Where does an old-school gentleman buy his wine and umbrellas? Why did Robbie Williams feud with his next-door neighbor? How has the city commemorated the Queen Mother and Princess Diana? In which park do 100-year-old naked ladies cavort on the banks of the Thames? Where did Lenin and Julian Assange campaign for their beliefs? And which bridge rolls itself up?
John Sykes was born in Southport, Lancashire, studied in Oxford and Manchester and lived in London before moving to Germany and making his home in Cologne. He has written and translated books about London, including one in the form of a Sherlock Holmes mystery, and is the author of several travel guides about the British Isles.