111 Places in Glasgow That You Shouldn't Miss Revised (Paperback) 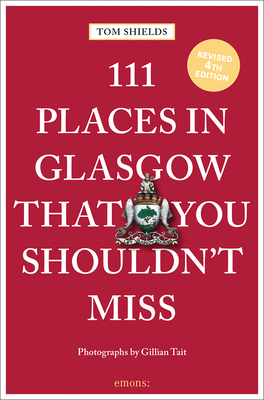 111 Places in Glasgow That You Shouldn't Miss Revised (Paperback)


Coming Soon—Pre-Order Now
- The ultimate insider's guide to Glasgow - Features interesting and unusual places not found in traditional travel guides - Part of the international 111 Places/111 Shops series with over 650 titles and 3.8 million copies in print worldwide - Appeals to both the local market (almost 600,000 people call Glasgow home) and the tourist market (more than 2 million people visit Glasgow every year ) - Fully illustrated with 111 full-page color photographs - Revised and updated edition Glasgow was once known as the Second City of the British Empire - the powerhouse of the industrial revolution, a great port and merchant city whose architectural and cultural magnificence hid a darker side of urban poverty and squalor. Today the heavy industry is long gone, and 21st-century Glasgow is comfortable in its role as a smaller, cleaner, greener city, a vibrant and stylish center for the arts and learning, now even more friendly and culturally diverse. With a wealth of insider's local knowledge and engaging anecdotes, 111 Places in Glasgow That You Shouldn't Miss will guide you round a huge variety of intriguing sights, unique venues and surprising corners of this great city, helping you understand how the people made Glasgow and how Glasgow made its people.
Tom Shields was born in Glasgow and has never left, apart from frequent sojourns to Barcelona. He studied at Strathclyde University on and off (more off than on) and after 32 years finally graduated with a hybrid BA degree in engineering, mathematics, Spanish, Latin American studies, Catalan, and wine-tasting. He received an honorary doctorate from Strathclyde, officially for services to Glasgow humour but more likely for his efforts to keep the university's bars and restaurants busy. He fell into journalism at an early age and spent more than 40 years at the Glasgow Herald and Sunday Herald, much of the time writing Diary columns. His five Diary collection books are still popular, mainly in charity shops.