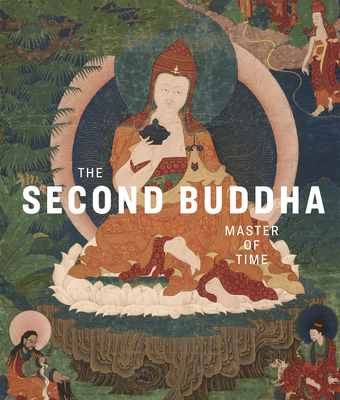 
Special Order—Subject to Availability
This book explores the iconography of Padmasambhava, a famous and timeless figure in Tibetan and Himalayan Buddhist cultures.

Padmasambhava, a legendary Buddhist master believed to be instrumental in bringing Buddhism to Tibet, is often known as "The Second Buddha." According to popular legend, Padmasambhava miraculously appeared as a boy in a lotus blossom floating on a lake. The Second Buddha: Master of Time explores visual expressions of Padmasambhava's legends in sculptures, textiles, paintings, illuminated manuscripts, and a portable shrine that date from the 13th to the 19th century. Essays present new scholarship on Padmasambhava and show a central and multidimensional character with an enduring place in Tibetan and Himalayan Buddhist cultures.
Published in association with the Frances Young Tang Teaching Museum and Art Gallery at Skidmore College
ELENA PAKHOUTOVA is Curator of Himalayan Art at the Rubin Museum of Art in New York.