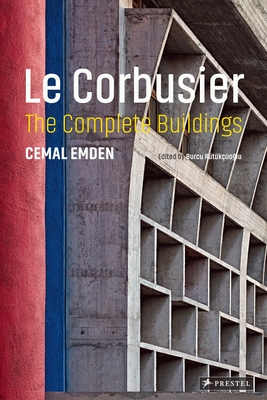 
Not On Our Shelves—Ships in 1-5 Days
This visual tour of every one of Le Corbusier’s buildings across the world represents the most comprehensive photographic archive of the architect’s work. In 2010, photographer Cemal Emden set out to document every building designed by the master architect Le Corbusier. Traveling through three continents, Emden photographed all the 52 buildings that remain standing. Each of these buildings is featured in the book and captured from multiple angles, with images revealing their exterior and interior details. Interspersed throughout the book are texts by leading architects and scholars, whose commentaries are as fascinating and varied as the buildings themselves. The book closes with an illustrated, annotated index. From the early Villa Vallet, built in Switzerland in 1905, to his groundbreaking Unité d'Habitation in Marseille, completed in 1947, this ambitious project presents the entirety and diversity of Le Corbusier’s architectural output. Visually arresting and endlessly engaging, it will appeal to the architect’s many fans, as well as anyone interested in the foundation of modern architecture.
Cemal Emden is an architect by trade who specializes in photographing architecture, interior design, landscape, and furniture. His photography has been widely published in magazines, books, and exhibitions both in his home country of Turkey and throughout the world.
"It’s an engaging journey through Le Corbusier’s masterworks, with stops at many of his lesser-known (and, often, less characteristic) buildings." -The Tangential