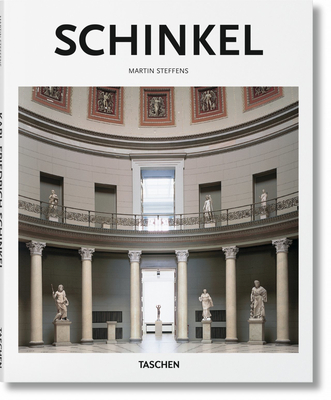 With an eye for detail as much as expanse, Karl Friedrich Schinkel (1781-1841) made his name as an architect and urban planner, a painter, and as a designer of both furniture and stage sets. His work was so admired by King Frederick William III that Schinkel acted as state architect of Prussia for nearly his entire career, creating major landmarks in Berlin, including the National Theatre and the Altes Museum.

Much of Schinkel's most famous work adopted Neo-Classical aesthetics, drawing upon Ancient Greek paradigms rather than those of Imperial Rome. He would subsequently turn to a Neo-Gothic style, as seen in the elegant windows and soaring nave of Berlin's Friedrichswerder Church. Later, Schinkel would adopt an unusually streamlined, red brick fa ade in the Academy of Architecture, now considered a forerunner of modern architecture.

Considered a genius by contemporaries, Schinkel now gets the TASCHEN treatment with this richly illustrated introduction to his expansive oeuvre and commitment to beautiful form and function.

Born back in 1985, the Basic Art Series has evolved into the best-selling art book collection ever published. Each book in TASCHEN's Basic Architecture series features:

an introduction to the life and work of the architect

the major works in chronological order

information about the clients, architectural preconditions as well as construction problems and resolutions