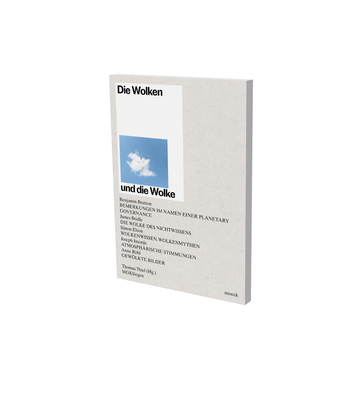 
Special Order—Subject to Availability
Clouds—without us being aware of it—have an elementary significance for us. We inscribe our wishes, hopes, and fears into their fleeting, indeterminate diversity. The artistic “discovery” of the cloud began in the Middle Ages and intensified in the 19th century, parallel to its growing importance in the natural sciences and humanities. In the context of globalisation, virtualisation, and 20th century theory, the cloud is now developing into a model for describing the complexity of contemporary conditions. It is becoming a symbol of networked information architecture, geopolitical relations, and new concepts of space. The book deals with the phenomenon of the cloud from a contemporary perspective; it goes much further than the customary cloud images. Using a variety of media, the contributions range from artistic translations of the natural motif to the technical infrastructure of the clouds and their affects. The works presented combine ecological, socio-political, economic, and technological aspects. The focus is on exploring the various perceptions, materialities, and functions of the cloud(s) today.
Thomas Thiel, born in Nuremberg in 1977, is a writer, curator, and, since 2019, director of the Museum für Gegenwartskunst in Siegen. Previously, he directed the Bielefelder Kunstverein since 2008. After studying cultural studies and aesthetic practice in Hildesheim, Thiel worked as a curator at the ZKM Center for Art and Media in Karlsruhe. James Bridle, born 1980, is an artist, writer, and publisher based in London. He was writing for WIRED, Icon, Domus, Cabinet Magazine, The Atlantic, and has a regular column for The Guardian on publishing and technology. Bridle coined the New Aesthetic; their work "deals with the ways in which the digital, networked world reaches into the physical, offline one." Bridle studied computer science and cognitive science at University College London. Joseph Imorde, born in 1963, is an art historian, university lecturer, and publisher. He has been Professor of Modern and Contemporary Art History at the University of Siegen since 2008. Research fellowships have taken him to the University of Michigan, Ann Arbor, in 2008–2011, and in 2012 he was a scholar at the Getty Research Institute, Los Angeles. In 1996 he founded his Edition Imorde. Simon Elson, born in 1980, studied art history and literature, and lives as a freelance writer in Berlin. Since curating two exhibitions of cloud art from the 19th century to the present in Munich and Berlin in 2016—from C. F. Søerensen to Friedrich Loos and Wolfgang Tillmans—he has been fascinated by celestial images. Benhamin H. Bratton, born 1968, is an American sociologist and design theorist, known for philosophical and applied research and for his writing on the geopolitical implications of what he terms “planetary sacale compuatation.” Bratton is Professor of Visual Arts at the University of California, San Diego and author of books and essays on philosophy of technology, art and architecture, political theory, and computer science. Anne Röhl is in residence at the Zentralinstitut für Kunstgeschichte as a Franz Roh Fellow from March to May 2016. She is a PhD candidate at the University of Zurich and predoctoral researcher in the research group Textile – An Iconology of the Textile in Art and Architecture at the University of Zurich. She studied Art History, Fine Art, and English Literature at the Universities of Siegen and Southampton. Her research has been funded by the German National Academic Foundation, the Swiss National Science Foundation, and Harvard University.