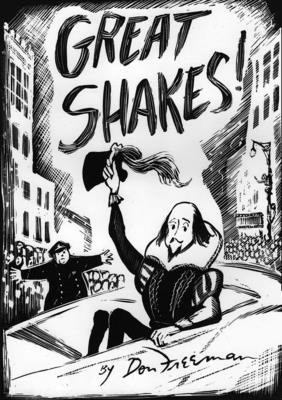 
In Stock—Click for Locations
In simple yet all-telling black-and-white graphics, Freeman unfolds a humorous, lively, deeply human, and yet modern story of William Shakespeare being brought down from Heaven to help Hollywood out of a creative depression. Naturally, in a new environment, "Shakes" cannot produce hit material on call... and so his adventures begin – with humorous and deep consequences, all told without words! Enjoy Don Freeman’s humour and his wonderful and sense of life with all of humanity’ highs and lows and in-betweens.
Don Freeman was born in San Diego in 1908. He hitched his way to New York in the late 20s, where he studied at the Art Students' League and developed a passion for the theater and sketched the life on New York streets and back alleys. He later turned to children's books and wrote and illustrated over 25 books for children and young people. He achieved world fame with Corduroy, the touching story of a relationship between a teddy bear and a girl. At his death in 1978 Don left several unfinished books that taotime is now publishing for the first time.