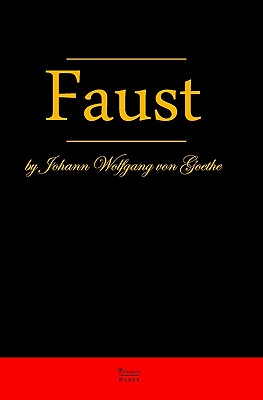 
Not On Our Shelves—Ships in 1-5 Days
(This book cannot be returned.)
Johann Wolfgang von Goethe's Faust is a tragic play. It was published in two parts: Faust: der Trag die erster Teil (translated as: Faust: The Tragedy Part One) and Faust: der Trag die zweiter Teil (Faust: The Tragedy Part Two). The play is a closet drama, meaning that it is meant to be read rather than performed. It is Goethe's most famous work and considered by many to be one of the greatest works of German literature.
Johann Wolfgang von Goethe (28 August 1749 - 22 March 1832) was a German writer and according to George Eliot, "Germany's greatest man of letters... and the last true polymath to walk the earth." Goethe's works span the fields of poetry, drama, literature, theology, humanism and science. Goethe's magnum opus, lauded as one of the peaks of world literature, is the two-part drama Faust. Goethe's other well-known literary works include his numerous poems, the Bildungsroman Wilhelm Meister's Apprenticeship and the epistolary novel The Sorrows of Young Werther.