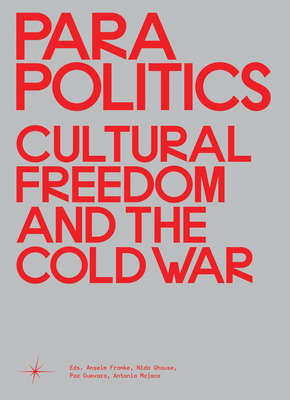 
Not On Our Shelves—Ships in 1-5 Days
An examination of the use of modernism in the twentieth-century battle for US hegemony, through the activities of the CIA-funded Congress for Cultural Freedom.

Parapolitics confronts the contemporary fate of intellectual autonomy and artistic freedom by revisiting the use of modernism in the twentieth-century battle for US hegemony. It builds on a major exhibition at Haus der Kulturen der Welt (2017–18) that took as its starting point the Congress for Cultural Freedom (CCF)—an organization covertly funded by the Central Intelligence Agency in order to steer the Left away from its remaining commitment to communism. Paying particular attention to CCF activities in the non-European world during a period of decolonization and the Civil Rights Movement, Parapolitics assembles archival documentation from five continents alongside a selection of historical artworks to explore the context in which artists negotiated the framing and meaning of their work. A rich reference book for future researchers and everybody interested in the legacy of modernism, the publication also presents more than thirty newly commissioned contributions by contemporary artists and scholars.

Anselm Franke has been Head of Visual Arts and Film at Haus der Kulturen der Welt (HKW) since 2013.

Paz Guevara is a curator, researcher, and author based in Berlin.

Antonia Majaca is a curator, and writer based in Berlin and Research Leader at the Institute for Contemporary Art at the Graz University of Technology.