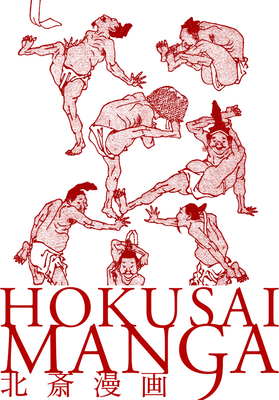 
Not On Our Shelves—Ships in 1-5 Days
The legendary masterpieces of Hokusai-fifteen volumes in a single chunky book. Hokusai Manga is one of the masterpieces by Katsushika Hokusai (1760-1849), a master of Ukiyo-e art, depicting ordinary people's lives, animals, plants, landscapes and human figures, historical and supernatural, even demons and monsters, as if it were a visual encyclopedia, amounting to fifteen volumes. Hokusai Manga turned out to be very popular among every class of people, from feudal lords to the general public, and became a long time best-seller in the Edo period. This book selects pieces from each volume and compiles them into one charming book. The original masterpiece spread throughout Japan and flowed into Europe in the middle of the nineteenth century, where it had a striking impact on artists, including Impressionists Manet, Monet, Degas, and others. The artistic movement Japonisme began in part due to its influence.
Katsushika Hokusai (1760-1849) was a Japanese artist and ukiyo-e painter of the Edo period, and best-known as the author of the woodblock print series "Thirty-six Views of Mount Fuji."

Kazuya Takaoka was born in Kyoto in 1945. As a graphic designer, he has received many outstanding awards, including the Gold Medal at the Japan Graphic Design Exhibition and the Gourmond World Cookbook Award for Best Cookbook Design. Among his works include Noh: Classical Japanese Performing Art published by PIE BOOKS.