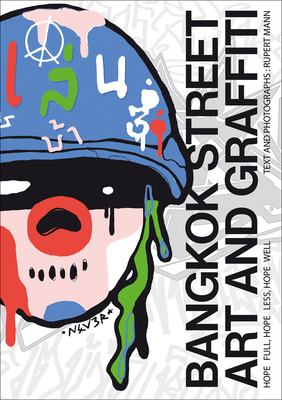 
Special Order—Subject to Availability
- The first major in-depth look at Bangkok's vibrant and active street art scene - Unique interviews with the artists who risk the full power of the establishment to protest at social injustice as they see it - Incredible photography throughout - Insightful commentary by the author Documenting an alternative history and social commentary by Bangkok's graffiti and street artists, this insightful and thought-provoking book offers fresh insight into Thai subcultures. Not given a platform elsewhere, street art and graffiti gives artists the opportunity to protest the social injustices they encounter. Through their art, they speak out against dictators and the political elite, as well as the extensive gentrification sweeping Bangkok. In addition, this book is the only visual record of (what was sarcastically named) Thailand's Stonehenge: standing pillars covered in graffiti along the abandoned Hopewell elevated rail line that was supposed to link the city to the airport, a $3 billion dollar project begun in 1990 and mired in corruption. The pillars - the only part of the project that was built - represent the overwhelming corruption that marks the past 20 years in Thailand. They are scheduled to be demolished this year.
Australian by birth, Rupert Mann is an architectural and cultural heritage specialist, writer, and photographer. He has worked with indigenous communities in Australia and remote tribal groups in Papua New Guinea, has excavated Bronze-Age and Byzantine burials in Cyprus, and was a co-founder of the community-based lobby group Melbourne Heritage Action, which campaigned successfully for the City of Melbourne to upgrade its heritage lists and strategies. Rupert has lived in China, where he trained with a Beijing circus, and currently lives in Yangon, Myanmar, where he works with the Yangon Heritage Trust and recently co-authored the Yangon Heritage Strategy. He has done several photographic series that focus on neglected urban heritage, including a portrait of Kuala Lumpur's infamous Pudu jail days before it was demolished, and a record of Bangkok's Hopewell street pillars recently removed during an upgrade of the city's railway network. Prison Pentridge in Australia, where the fascinating nexus between, place, people, memory and change is powerfully legible, has intrigued him since childhood. His body of work devoted to the prison represents the culmination of a nine-year project to ensure that its history is not buried during redevelopment.