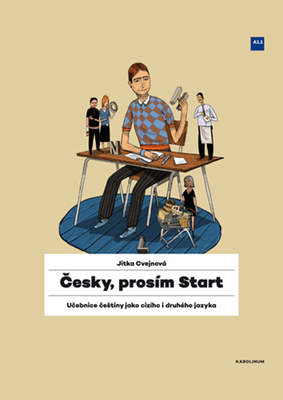 
Special Order—Subject to Availability
These new editions of the first universal textbooks for studying Czech as a foreign language employ a strictly communication-based format that requires no mediating language and thus is ideal for users of all mother tongues. Fresh and modern in their approach, these books systematically develop all language skills—reading, speaking, listening, and writing—using engaging illustrations and texts that emphasize the natural dialogical character of the language as used in everyday speech. Jitka Cvejnová’s extensive experience teaching intensive, immersive classes and introducing foreign learners to the Czech world through language also enables her to enrich the books with valuable sociocultural context. Consequently the only Czech language textbooks based on the Common European Framework of Reference for Languages levels, they are ideal for use in both short-term and long-term courses.

The introductory (European Certificate CCE level A1.1) volume Česky, prosím Start includes a writing exercise book and a CD with listening exercises and is intended as supplementary material for the beginning stages of language instruction. Also suitable for students who are experiencing problems learning Czech, it focuses on practicing the sounds and written components of the language at a slower pace.
Jitka Cvejnová has been teaching Czech as a second or other language since 1982 at prestigious institutions in the Czech Republic and abroad.
“Cvejnová has thoroughly revised traditional approaches to presenting the Czech language to non-native users and offers students as well as teachers a modern teaching concept which is not based on a formal, descriptive interpretation of the language but which systematically tailors the teaching material to the functional and topical competence of the learner in a given situation. Cesky, prosím is the only Czech textbook, at the present time, which not only theoretically declares adherence to the common European language policy principles but also consequently reflects them . . . and is in compliance with the language descriptors marking the individual language acquisition levels as set in the Common European Framework for Languages. Being based upon the principles of the Common European Framework for Languages and being semantically compatible with the demands of standardized language acquisition testing, the textbook is welcome preparation for state recognized language testing.”
— Barbora Štindlová, Institute for Language and Preparatory Studies, Charles University in Prague