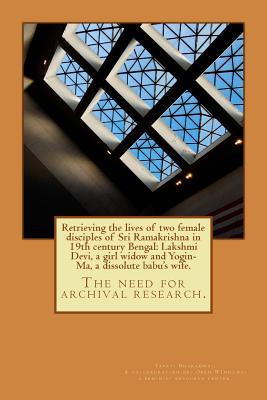 
Not On Our Shelves—Ships in 1-5 Days
(This book cannot be returned.)
In order to create a feminist genealogy in India, we need to be able to incorporate a diverse range of voices of women. As there is some documented source on the lives of women who were directly connected to Sri Ramakrishna, we should also embrace these narratives when establishing a tradition of the lives of women who were living in the nineteenth century in India. This book looks at the lives of two female disciples of Sri Ramakrishna, the mystic saint who lived in the nineteenth century, at Dakshineshwar, near Calcutta. I examine the lives of Lakshmi Devi (1864-1926), Sri Ramakrishna's niece, and Yogin-Ma (1851-1924), and both were disciples of the Master. Lakshmi Devi was a child widow, and Yogin-Ma was the daughter of Prasanna Mitra, a doctor of the Calcutta Medical College and was quite involved with the Young Bengals; Yogin-Ma left his dissolute husband and lived at her maternal home most of her adult life. The lives of these two women is reasonably documented, and yet we know very little about them in feminist histories, unless one happens to read the publications of the Ramakrishna Mission.Of course, the question that is inevitable is this: why do we need to know about them at all as they would have led conventional lives within the domain of married domesticity, raising children and involved in domestic labor, as was the norm for all women in nineteenth century Bengal. Of tantamount importance is the fact that these two female disciples, who were born in quite conservative families, were able to occupy a space in the semi-public realm of the religious-spiritual, through their involvement with Sri Ramakrishna. They were at par with the male devotees and disciples of Sri Ramakrishna, and that is saying a lot. Sri Ramakrishna ensured that there was parity between his male and his female disciples.This book also argues that Sri Ramakrishna's acts of gender inclusion in an essentially male domain of Hindu religion in the nineteenth century is a historical fact that has been elided by feminist scholars; more surprisingly, all hagiographical narratives on Sri Ramakrishna, published by the Ramakrishna Mission, are also silent about this. What we know about Sri Ramakrishna is based on interpretations that have been written about him; more often than not, they are hagiographical in nature and not surprisingly so. But what is quite interesting is that Sri Ramakrishna was actually quite socially transgressive for his time period, considering the fact that he was an illiterate Brahmin-priest from rural Bengal, and we never really get to hear this about him. He was loath to perpetuate and maintain the status quo which was represented and disseminated by patriarchal, Hindu institutions.
OPEN WINDOWS is a feminist research center, based in Bangalore. If it could, it would sustain itself with endless cups of tea and lots of stimulating research. The purpose is to undertake independent research that will subsequently be published. Even as we live in a postcolonial world in the 21st century in India, where enormous socio-cultural changes are occurring, how do we make sense of the ramifications of these changes in terms of gender. Open Windows encourages research on both contemporary and historical socio-cultural issues and literary issues, from a feminist perspective. These findings will subsequently be documented, archived and published as monographs and essays. Allowing for an independent space, both literal and metaphorical, can make diverse voices heard. The term - Open Windows, therefore, is literally the view one has from one's standpoint. Do we see a view that is emancipatory and empowering?