Muhammad and the Origin of Islam in the Byzantine-Slavic Literary Context: A Bibliographical History (Paperback) 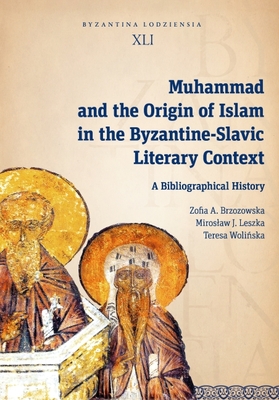 Muhammad and the Origin of Islam in the Byzantine-Slavic Literary Context: A Bibliographical History (Paperback)


Special Order—Subject to Availability
The presented publication is a type of bibliographic dictionary, compiled by an interdisciplinary team of authors (Byzantynists and Paleoslavists), containing an overview of medieval texts referring to the person of Muhammad, the Arabs, and the circumstances of the birth of Islam, which were known in the Slavia Orthodoxa area (especially in its eastern part, i.e. in Rus'). Therefore, it presents the works written in the Church Slavic language between the 9th and the mid-16th centuries. As the Old Rus' discourse on Islam was shaped under the overwhelming influence of Byzantine literature, the majority of the presented sources are Byzantine texts from the 6th-14th centuries, translated into the literary language of the Orthodox Slavs. The reader will also find here a discussion on several relics, originally created in other languages of the Christian East (Syriac, Arabic) and the West (Latin), which - through the Greek - were assimilated on the Slavic ground. This book aims to fill a gap in previous studies on inter-religious polemics in the Middle Ages, which has usually focused on Christian-Muslim cultural relations, analyzing Greek and Latin texts or the works written in one of the Middle Eastern languages, almost completely ignoring the Church Slavic heritage. It is worth noting that a number of the texts presented here (as well as Slavic translations of Byzantine sources) have not been published so far. The information on them, provided in this monograph, is therefore the result of research conducted directly on the manuscript material.
Zofia A. Brzozowska - (b. 1986), PhD, employed at the Department of Slavic Philology, Faculty of Philology, University of Lodz. A Paleoslavist and Byzantinologist, she focuses her research on the spiritual culture of the medieval Slavia Orthodoxa, the literature of Old Rus', and the history of women in the Middle Ages. She has authored or co-authored 6 books as well as over 60 articles, book reviews and translations.Miroslaw J. Leszka - (b. 1963), full professor at the Department of Byzantine History, Faculty of Philosophy and History, University of Lodz. His scholarly interests include imperial power in the early and middle Byzantine periods, the role of women at the court in Constantinople, and especially the history of Bulgaria (7th-11th cent.). He is the author or co-author of 11 books as well as over 180 articles and reviews.Teresa Wolińska - (b. 1963), associate professor at the Department of Byzantine History, Faculty of Philosophy and History, University of Lodz. Her scholarly interests include the history of the Byzantine Empire between the 4th and 8th centuries, with a research focus on the relations between Byzantium and the countries of the Barbarian West and the Papacy, as well as on the eastern part of the Empire, the Caucasus region in particular. She is the author of a monograph on Byzantine Sicily.