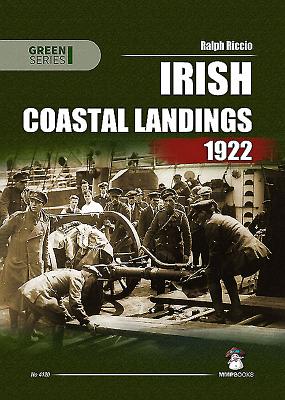 By Ralph A. Riccio


Special Order—Subject to Availability
This book is a history of Irish National Army coastal landings, many of which have been previously unreported in histories of the Irish Civil War, that were carried out against Republican forces from July through December 1922. It provides details on each of the landings to include specific landing sites, the ships used to transport the troops, number of troops, armored cars and artillery involved, casualties, major personalities who participated, and objectives achieved. In addition to period photos of the ships, equipment and troops involved, the text is also supported by both vintage and current comparative photographs of most of the landing sites. The book also includes, for the first time ever, superb scale drawings of all of the ships involved in the landings.