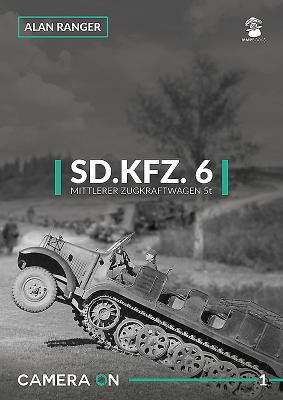 This is book number 1 in the Camera on series.

During WW2, the German armed forces were the greatest user of half-track vehicles. Such vehicles were used in the Wehrmacht, Luftwaffe and Waffen-SS, where they served as personnel carriers, tractors, combat engineering vehicles, as well as self-propelled carriage of anti-aircraft and anti-tank guns. One of them was the Sd.Kfz. 6 (Sonderkraftfahrzeug 6) Mittlerer Zugkraftwagen 5 t (middle half-track vehicle 5 tons). It was designed to be used as the main towing vehicle for the 10.5 cm le.FH 18 howitzer. Sd.Kfz. and was manufactured mainly by B ssing-NAG, with about 3,800 units being produced. The book presents a collection of photographs of different versions of the tractor from the private archives of German soldiers. The photographs depict vehicles serving on all fronts and in a wide variety of roles. This profusely illustrated photo album includes a large number of previously unseen pictures, many from private sources in Germany. Whatever the rules might have said, German soldiers took many photos, and these are the basis for this book. Photos of the all the main production versions are shown, including self-propelled anti-aircraft guns, artillery tractors and pioneer vehicles. Book contains about 120 period photos.