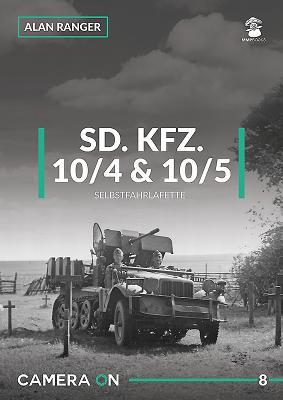 This is book number 8 in the Camera on series.

This new photo album in the MMP/Stratus "Camera On" series contains 100+ photos of the Sd.Kfz. 10/4 & 10/5 Selbstfahrlafette. The Selbstfahrlafette (Sd. Kfz. 10/4) f r 2cm Flak 30 and the Selbstfahrlafette (Sd. Kfz. 10/5) f r 2cm Flak 38 were self-propelled Flak halftracks based on the Sd.Kfz 10 One ton vehicle. In the firing mode the vehicle had hinged side walls that opened up to enlarge the firing platform at the back and to both sides. Except for armored shield often fitted to the AA gun these vehicles were unarmored. These profusely illustrated photo albums include many previously unseen pictures, many from private sources in Germany.