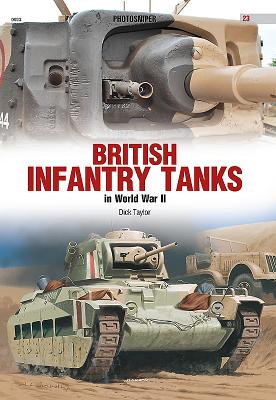 This is book number 23 in the Photosniper series.

Before the start of the Second World War, British armored doctrine was in a terrible muddle. Opinion had been divided between the proponents of the tank who saw it as the weapon of break-in, using it as an infantry support weapon, and those who saw it as the weapon of breakout, using it to restore mobility and to destroy the enemy's forces behind the frontline. In many ways it was a division between those who saw the tank solely through the prism of the experience of the First World War, and those who saw it a decisive weapon for the future. Britain was also conscious of the continuing requirements for imperial policing, in which small tanks and armored cars had already proved their worth. As a consequence, it was decided that Britain needed three different classes of tanks: Light tanks for the policing role that could also be used for reconnaissance duties in a general war, fast and lightly armored Cruiser tanks for breakout and exploitation, and heavily armored but slow Infantry tanks for the break-in.