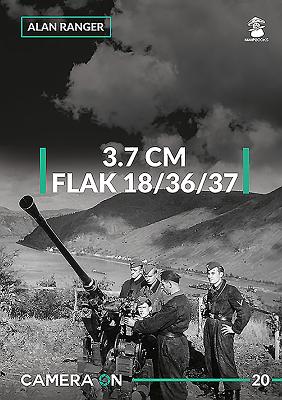 This is book number 19 in the Camera on series.

This new photo album is number 20 in the MMPBooks/Stratus "Camera On" series and is the first to cover an anti-aircraft weapon alone and whilst there have been a few books covering medium German 37mm Flak weapons before the 37 mm Flak 18/36/37 has never been covered in such photographic depth, this truly historically significant weapon along with the other German 37 mm weapons it evolved into are illustrated in this book that contains 160+ photographs. Nearly all of the photos being from the authors collection that were originally taken by ordinary German soldiers not professional propagandists. In this volume we endeavor to show this rarely illustrated equipment in detail but still show it as the soldiers viewed it as both their work place and in some cases also their home, not the highly posed and polished views of the official photographers.
This book is an invaluable reference for military historians and modelers alike.