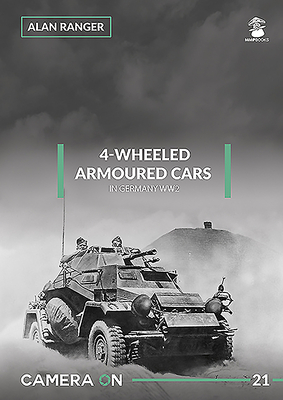 This is book number 21 in the Camera on series.

Germany was at the forefront of the development of armored cars during the First World War, however with the end of the war in November of 1918 and the signing of the Treaty of Versailles in 1919, the victorious allies imposed a complete ban on the German Army being equipped with any armored vehicles including armored cars. In the early 1920's, The "Zusatz von Bologne," which was an addendum to the Treaty of Versailles, allowed the German Army to produce armored cars primarily for policing duties; eventually this gave rise to the Sd.Kfz. 13 series in the early 1930's.

However, with the Nazi party takeover of Germany in 1933 new 4-wheeled armored cars were ordered and they were all to be based on the Horch off-road heavy passenger chassis. They were numbered Sd.Kfz. 221, 222 and 223 the same chassis was also developed into the Sd.Kfz. 260 and 261 radio command vehicles. This publication covers the German 4 wheeled cars in great photographic detail focusing on the armored cars and their crews as they dealt with the conditions and circumstances they found themselves in. Photographs from the author's collection of unique German soldier's photos have been used to illustrate this book.