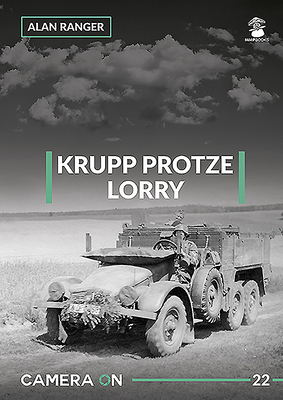 This is book number 22 in the Camera on series.

The L 2 H 43 and L 2 H 143 better known by its nick name given to it by the troops that used it "The Krupp-Protze" (Krupp Boxer) was a specialized, multipurpose, six-wheeled 6x4 (six wheel 4 wheel drive) German light off-road truck and artillery tractor. It was fitted with the Krupp M-304 flat four engine, a 4-cylinder horizontally opposed petrol engine that originally delivered 55hp but was upgraded to deliver 60hp in 1936. It was this flat engine the allowed the fitting of the slopping engine bonnet that gave rise to the vehicles nickname. The Krupp Boxer saw extensive service on all of the operational fronts where the German army was engaged.

This publication covers the Krupp-Protze in great photographic detail focusing on the trucks and their crews as they dealt with the conditions and circumstances they found themselves in. It is illustrated with the author's own collection of photographs, all taken by the average German soldier and not official army cameramen whose photos are already well known.