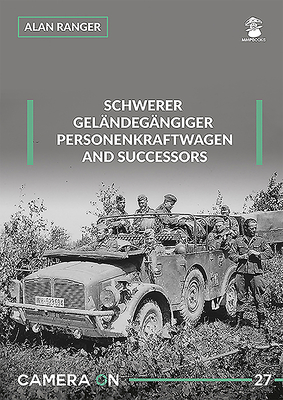 This is book number 27 in the Camera on series.

This new photo album is number 27 in the MMPBooks/Stratus "Camera On" series. It is the first to cover such a broad selection of Germany's heavy off road passenger cars. It includes both the Schwerer Gel ndeg ngiger Personenkraftwagen and its successors, the Horch 108 type 1 and its licensed build Ford type EG equivalents, as well as the heavy cars built on light truck chassis such as the Styer 1500 and Mercedes 1500A & S types.

This book contains 140+ photographs of German heavy passenger cars photographed in operation in the conditions they had to work in. This volume illustrates these vehicles as the soldiers themselves viewed them in both their working environment and, indeed in many cases, the home they had to live in, not the highly polished and sanitized views of the official photographers. This book is an invaluable reference for military historians and modelers alike.