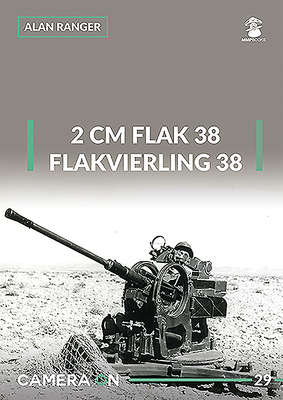 This is book number 29 in the Camera on series.

This new photo album is number 29 in the MMP Books/Stratus "Camera On" series. It is the first to cover in such photographic detail the German usage of the 2 cm Flak 38 and its quadruple mounting the Flakvierling 38. These weapons saw extensive action on all battlefronts of the Second World War wherever the German armed forces saw service. While the 2 cm Flak 38 was an excellent weapon when first developed, by the time it entered service even the German army knew that it was in need of a replacement weapon system. The Germans concentrated on 37mm weapons and above from then on, however the Flak 38 still gave valued service against low flying aircraft and ground targets and proved to be a valued weapon throughout the war, it even saw service with some other nations well into the 1970's. This book contains 140+ photographs taken by the average German soldier of both the 2 cm Flak 38 and the Flakvierling 38 as well as their crews in many of the areas they operated within.

This volume illustrates these weapons as the soldiers themselves viewed them in both their fighting environment and, in many cases, just as a tool they lived with and had to look after on a daily basis, not the highly polished and sanitized views of the official photographers. This book is an invaluable reference for military historians and modelers alike.