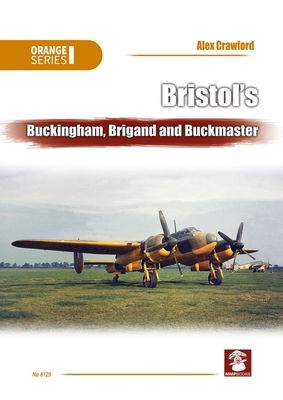 By Alex Crawford, John Smith (Other)


Coming Soon—Pre-Order Now
In late 1939, the Air Ministry were looking to replace the Blenheim as a medium bomber. Bristol Aircraft Company (BAC) initially came up with a bomber development of the Beaufighter, the Type 161. Due to specification changes and redesigns, the end result was the Type 163 Buckingham, a twin engined, twin tailed medium bomber. At the time of the Buckinghams conception inquiries were made about a torpedo bomber version. A redesign of the Buckingham brought about the Type 164 Brigand. The torpedo requirement was eventually dropped and the aircraft re-configures as a bomber. With no suitable trainers to train the Buckingham and Brigand pilots BAC came up with the Buckmaster, which was basically a Buckingham with a new nose section containing dual controls.

By the time the Buckingham and Brigand entered service their roles had been superseded with newer and better aircraft. Most Buckinghams went straight into storage to await their fate, but some were converted in high speed courier aircraft with four seats. But it was too little too late. The Mosquito could do a better job at almost half the cost. The Brigand with its long range was earmarked for the Far East and the battle against Japan, but the war ended before they could be sent over. It was the Malaya Emergency that saved the Brigand. Carrying out a role for which it was never designed, that of a dive bomber, two Squadrons carried out over 3,500 against the Communist Terrorist.

Had it not been for the constant delays and construction changes the aircraft may have lived up to their expectations. As it was they were plagued by mechanical and hydraulic issues as well as structural defects. After a number of catastrophic airframe failures the Brigands were retired from operational service in early 1953.