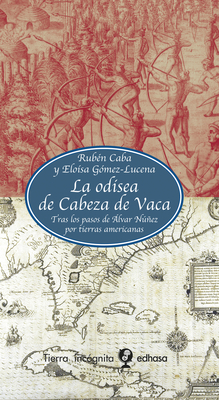 
Special Order—Subject to Availability
The "Naufragios" of Cabeza de Vaca constitute one of the fundamental stories to understand the epic of the Spanish conquerors in the New World. It tells of their unsuccessful expedition to the Florida peninsula, during which they had to deal with all sorts of difficulties and hardships. From the hurricanes that attacked them on the Cuban coast to the slavery to which they were subjected to by the natives on the Texas coast. In this book the authors have carried out an exhaustive investigation on all the existing documentation of the time, on cartography, on subsequent investigations and what is most striking is that they have traveled to the scenes of this adventure, tracking down possible clues.

Rubén Caba graduated in law and philosophy from the Complutense University of Madrid. His first literary text was a film script, released in 1970, about the Book of Good Love. Since then he has published a dozen books, including the travel book Por la ruta serrana del Arcipreste; the novels Islario, Hispán e Iberia, La puerta de marfil, and several others.