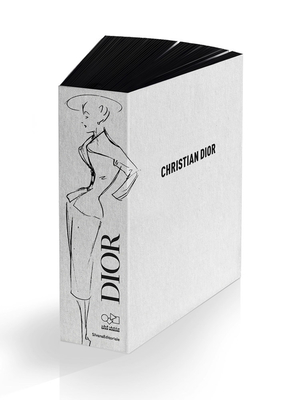 Dior as designer, collector and art dealer: a panoramic exploration of the legendary designer's world

This volume features around 120 haute couture designs by Christian Dior from the collections of the Mus e des Arts D coratifs and the House of Dior--including archival runway prototype and custom garments--showcased alongside fashion photography, film stills, vintage perfume, cosmetics and original sketches, Dior's furniture and other decorative pieces that demonstrate the designer's passion for collecting and his time as an art dealer.
The items reproduced here thus offer an overview of Dior's life and character, as well as his haute couture creations since 1947, always the epitome of modern elegance, with the selection taking as its unifying thread the fabric of dreams and the passing on of an aesthetic vision.
Christian Dior was born in Granville, a seaside town on the coast of Normandy, France, in 1904. While his family had hoped that he would become a diplomat, Dior preferred art. His preternatural talent resulted in him being hired by Robert Piquet in 1937, and he subsequently worked alongside Pierre Balmain and Lucien Lelong. Dior was an instant sensation after the Second World War. His designs, which asserted femininity, were a strong rebuke to the utilitarian, unisex clothing of wartime Europe, and came to symbolize the "New Look." Since his untimely death in 1957, an exceptional series of creative directors have imprinted their own style upon the iconic brand.